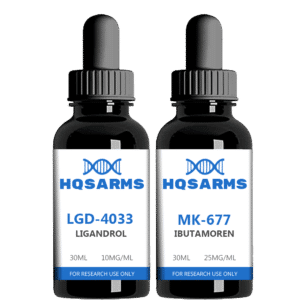 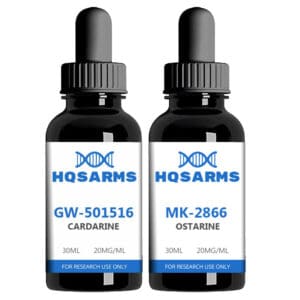 MK-677 is also known as Ibutamoren. It is a orally active, long acting growth hormone secretagogue that is being researched as a possible alternative to HGH. This product is not intended for human consumption but strictly for research purposes.

MK-677, also known as ibutamoren or nutrobal is an orally active, long acting growth hormone secretagogue. By mimicking the action of ghrelin, it increases the secretion of several hormones like growth hormone (GH) as well as insuline-like grow factor 1 (IGF-1).  What makes it a unique compound is the fact that it is the only effective alternative to HGH therapy that is orally active.

Unlike general HGH therapy, Ibutamoren increases growth hormone levels but it doesn’t increase other hormones like cortisol. This is a major advantage because cortisol suppresses the immune system, reduces wound healing and impairs learning and memory.

Ibutamoren boosts the levels of growth hormone (GH) as well as insuline-like grow factor 1 (IGF-1). Both of these hormones play an important role in muscle growth as well as strength. But at the same time they promote fat loss. This effect is also confirmed by clinical research as is shown in this study as well as this study.

But the positive effects of human growth hormone go well beyond simply increasing lean muscle mass. Above all, it is essential for total recovery because it plays an important role in tissue regeneration. Not only does it help with recovery after working out, but it can also help with injuries.

Another important benefit of MK-677 is that it improves sleep quality by prolonging the duration of REM sleep. But this effect is not just known from anecdotal evidence. Numerous clinical trials record MK 677’s sleep improving ability. For instance, a study by Copinschi et., Al in 1997 showed a 20% increase in REM (Rapid Eye Movement) sleep for subjects who took MK 677. For older adults, this increased to 50%! The REM stage is essential in maintaining healthy brain function and improving memory.

MK-677 stacked with other SARMS

Ibutomaren is most effective when used for an extended period of time. While growth hormone levels elevate fairly quickly, IGF-1 levels increase steadily over a longer period of time.

Many users stack growth hormone with androgenic compounds, including steroids or SARMs. When combined with Ostarine (MK-2866) the effects on recovery are improved, while a stack with Ligandrol (LGD-4033) or Testolone (RAD-140) increases the muscle building effects.